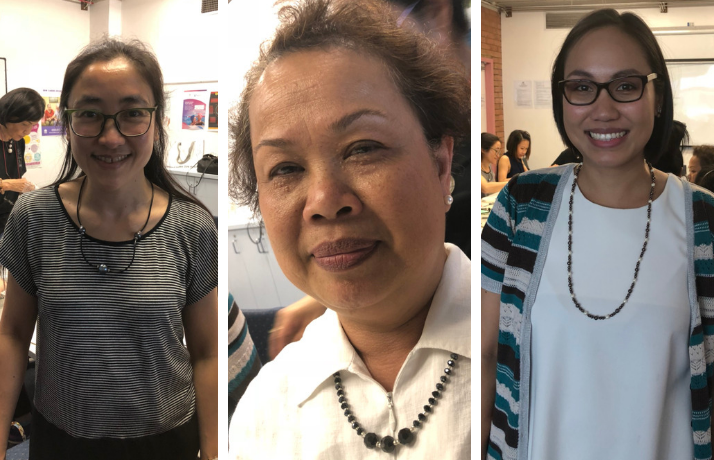 On December 2, our Thai women’s group enjoyed a basic accessory-making workshop at Advance Diversity Services while learning about the importance of recognising and responding to domestic and family violence. Kanyarat Tresise facilitated the information session with the help of volunteers, Tedheporn Antico and Khanung Ciserain.

Who came up with the idea of blending the making of accessories with raising DV awareness, and what was the thinking behind it?

In the Settlement Services Program (SSP) we like to provide useful and relevant information in a fun way. The reference group members suggested we run a session on domestic and family violence (DV) and family law information. Most female Thai migrants are on spouse visas, and cross-cultural family relationships, DV, divorce and other legal issues are common concerns for Thai women who feel stigmatised when DV occurs and relationships break down. Thai women also love practical and creative activities that they can apply to their daily life as a hobby or as a pre-employment skill. Combining these two sessions provided a soft entry to difficult conversations.

What accessories did the group make?

The women made necklaces, earrings and bracelets using beads – and the results were lovely (as these photos show).

What was the feedback?

Everyone was so happy and requested more jewellery making workshops! They had lots of fun and made new friends, and they found the Thai teacher Tedhiporn Antico and her assistant Khanug attentive and helpful. They were especially impressed that Tedhiporn provided all the materials and they were able to take home the jewellery for free.

Thanks so much to Thai teacher Tedhiporn Antico and her assistant Khanug for providing the materials and the wonderful session. We look forward to another session soon.

To empower our Thai new arrivals with interview and styling skills, our Thai community worker, Kanyarat Tresise, organised a workshop with Michelle Bonner at Dress for Success in Marrickville on November 15. The informative and practical session was a success – and this Q&A with Kanyarat reveals why.

What was the highlight of the Dress for Success session?

The tips for preparing for an interview were great. For example: research the job and the organisation; ask for information about the interview (i.e. how many people on the panel etc.); check transport to make sure you’ll be on time; and when you’re a candidate in the waiting room, you should always sit in a composed way to impress.

What did Michelle Bonner say, show or provide to the women in terms of dressing/styling?

While Michele Bonner helped me organise the session, however, she was not present on the day. Susan Dunn (pictured fourth from right) presented on interview skills.

What was one practical tip that participants will take on board when they are next going for an interview?

The standout tip: The candidate should feel comfortable in their clothing and the style of the clothes should be modest and conservative – not revealing. Be on the safe side and keep it formal for any role for which you have an interview.

Tell us more about the photo: Were participants dressed by Dress for Success to appear in the shot?

I’m standing next to Susan Dunn who presented on interview skills (she is fourth from the left). There were three Thai participants and the woman beside each of them is their own individual stylist. The women were able to take home the clothes they were dressed in. If any of these women gains employment they will be able to return to Dress for Success to get five sets of clothes, shoes, bags and other accessories for their working week.

Butt Out is a quit smoking project that targets Arabic-speaking communities in the St George region of Sydney. Its goal is to reduce the high levels of smoking in these communities by developing and delivering smoking prevention awareness strategies and practices that are culturally and linguistically appropriate.

In 2017, Advance Diversity Services (ADS) received an Innovations in Cancer Control Grant from the Cancer Institute NSW to implement this two-stage project over two years.

In February 2018, ADS completed stage one, which targeted the Chinese-speaking community. We are now developing stage two, which aims to reach Arabic speakers in the region who smoke, and empower them to quit.

Butt Out’s Arabic project worker, Hana Srour, and the project’s steering committee members have conducted a range of media interviews in Arabic to raise the awareness of the harms of the smoking. They have also actively promoted quitline services like iCanQuit and the NSW Quitline number 13 7848 (13 QUIT).

SBS Arabic radio interviews
In her first SBS Arabic radio interview on April 24, 2018, Ms Srour spoke about the prevalence of smoking among Arabic men living in the South Eastern Sydney Local Health District. She revealed that around 41.7 per cent of Arabic men in the region smoked as compared with 14.7 per cent of the general population. Ms Srour also translated much of the information about the project from English into Arabic to ensure she could more easily answer the interviewer’s questions.

Listen to the first interview here.

In her second interview with SBS Arabic radio on September 4, 2018, Ms Srour raised and reinforced awareness in Arabic-speaking communities of the harms of smoking. She also promoted Quitline’s services, support and contact number.

Listen to the second interview here.

• A good resource to help Arabic people understand the harmful effects of smoking is the booklet (in Arabic and English) Please don’t smoke near me.
• A video in Arabic outlining methods for quitting can be found here.
• Watch the video of Seham Gerges being interviewed by Aghapy TV about useful strategies for quitting smoking here.

Efforts rewarded
On August 5, Ms Srour was awarded a plaque at the Arncliffe Aurora Football Club community dinner to recognise her excellent work in the Arabic community to help stamp out tobacco use.

Anthony Scerri, Program Manager for ADS’ Settlement and Community Services Program, said ADS is proud of Ms Srour’s achievements relating to Butt Out. He is also confident stage two of the project will help many people recognise smoking is unhealthy and help them quit.